November has been my first month as your Master having taken over the role from Mike at our installation and Members’ Dinner on the 3rd of November. I would like to thank you all for your kind wishes and I hope that the evening was enjoyed by all those who attended. I know that I enjoyed the evening and the chance to spend time with many of you was much appreciated.

As with every Master before me I did hit the ground running.

St Paul’s Cathedral and the Garden of Remembrance

My first duty was to St Paul’s Cathedral and the Garden of Remembrance. This is a wonderful service attended by all the Masters where crosses are planted in memory of those who have died in conflict. We were fortunate to have a dry day and the sun shone the whole time.

The event was followed by a lunch at the Watermans’ Hall, another excellent opportunity to meet fellow Masters. In the evening I attended St Stephen Walbrook for the final service in the year of Past Lord Mayor Dr Andrew Palmley.

The Guild of Entrepreneur’s Lecture

I attended the Guild of Entrepreneurs Lecture and was able to hear first-hand how 6 self-made businessmen created their own businesses, one went on to become TV personality Gregg Wallace MasterChef.

I have attended several lectures given by Livery Companies. All have been different but very interesting and I have enjoyed them all.

The Lord Mayor’s Show I feel was a huge success and we were delighted to be joined in the carriage by Admiral Sir Trevor Soar KCB OBE, an honorary Liveryman, and his wife Lady Anne Soar. Haringey Sea Cadets, formally TS Wizard, were resplendent in their new shirts provided jointly by the Lightmongers and Admiral Sir Trevor. 56 Woolwich Air Cadets also provided support as they have done for many years now and which is greatly valued. 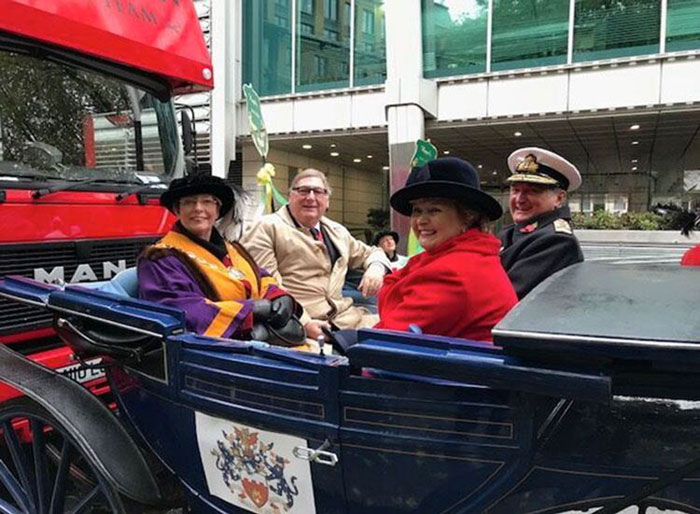 The students and staff from our two affiliate schools Mary Hare and New College Worcester followed the carriage enjoying all the atmosphere of the day. I am also delighted to report that the attendance of our own members was excellent and several new faces and families were evident. A dry Lord Mayors Show! What a luxury not to get wet.

I would like to single out our learned Clerk Phill Hyde for the enthusiastic manner in which he whipped our supporters and the crowd into a frenzy.

Afterwards, a number of us went to the NED for lunch and fellowship.My grateful thanks for all who supported me on the day.

The Festival of St Cecilia

The event is an annual event organised by “Help Musicians” a charity providing practical and financial support for musicians across all genres. I am sure you will agree with me that without music the world would be a poorer place.

John and I were invited to attend the ‘Annual Speech Day’ at Mary Hare School.

I cannot tell you how much I enjoyed this event.

We were taken into classrooms to see the children at work. It was inspirational. The staff are just so special and the results achieved are astounding.

The prize giving ceremony was a really joyful occasion and I am pleased to inform you that The Lightmongers Science Innovation Prize was awarded to Francis Allen for Cyber Security, The John Rowsell Sports Endeavour Prize was awarded to Dillon Parmar for computing and The Hugh Ogus Award went to Ashley Dunn who has completed two degree courses; the first in Robotics gaining a 2.1, and the second in Diagnostic Radiography, again gaining a 2.1.

This young man gave out all of the prizes and gave us an insight into his life both at Mary Hare and his life at University.

The event ended with a solo of Amazing Grace being sung by a pupil. A real tear jerker.

The Lightmongers are held in high esteem by the school and appreciate all that we do for them.

Next came the Red Cross Market. This event seems to be a tale of two halves.

Firstly it is very hard work. The logistics need to be spot on for it to work at all. We need goods to sell and people to sell them.

This year was very successful. We raised around four and a half thousand pounds, including prizes we had donated for the silent auction. My thanks to Air Chief Marshall Sir Stephen Hillier KCB CBE DFE, Admiral Sir Trevor Soar KCB OBE and Past Master Emeritus Walter Balmford MBE.

Past Master Emeritus Ian Crosby was responsible for all the electrics relating to the German Market in Guildhall Yard. The Stall was manned by enthusiastic members of the Company and Liveryman Peter McVeigh was most generous in providing us with the goods to sell.

This event does give our Company a high profile in the City and we are now established and looked for at every market.

The world is a very precarious place at present and the Red Cross are always prominent with help when disaster strikes. We should be proud that our contribution is being used to help many less fortunate than ourselves. 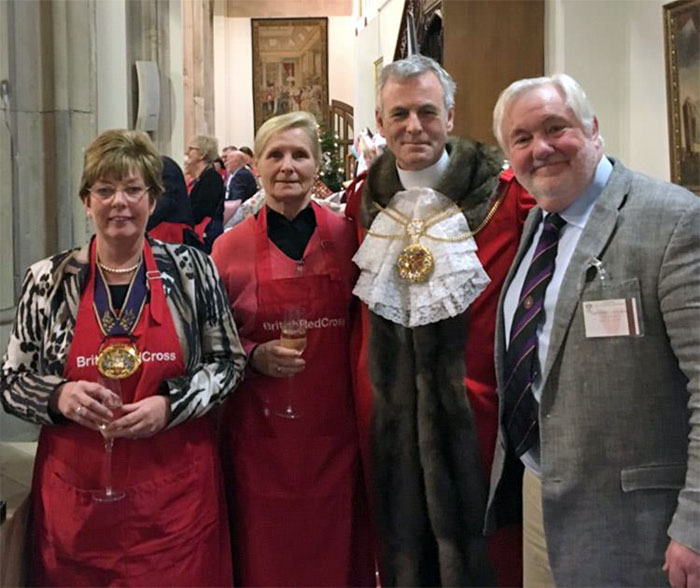 The Master, Barbara Harding and Sandy and John Rowsell with Sheriff Neil Redcliffe during his visit to the market.

My Consort John and I attended the Mercers’ Concert, followed by supper, in the magnificent Mercers’ Hall. This hall is simply splendid and is the only Livery Hall to have its own chapel.

Ironically the entertainment was provided once again by the internationally acclaimed trumpeter Crispian Steele-Perkins, but this time not only did he play the most wonderful music, he also gave us a history of the trumpet. He was accompanied on the piano by Leslie Pearson who has played keyboard in many famous films and has entertained royalty. The whole evening was delightful.

I attended lunch with the Spectacle Makers in the Apothecaries’ Hall. Ironically the Master this year is Mrs Felicity Harding and is married to another John Harding!

It was a fun event where I again met several Masters and another opportunity to promote The Worshipful Company of Lightmongers.

Our Carol Service this year was very well attended and again a really pleasant and friendly evening.

Rev Laura Jorgenson gave a most thought provoking address and the choir I am sure get better every year. Again, it was good to see new faces which I hope we will see again.

I say a huge Thank You to all of you who helped with the refreshments. You did a marvellous job and I am most grateful. Thank you also to our Clerk who works so hard to put it all together.

I am not going to say that the next event was the best so far but I will say it was an enormous privilege to attend the commissioning ceremony of the new aircraft Carrier HMS Queen Elizabeth.

The Clerk and I were treated as V.I.Ps and the Commissioning was attended by Her Majesty The Queen and Princess Anne along with many other dignitaries.

A day to remember!